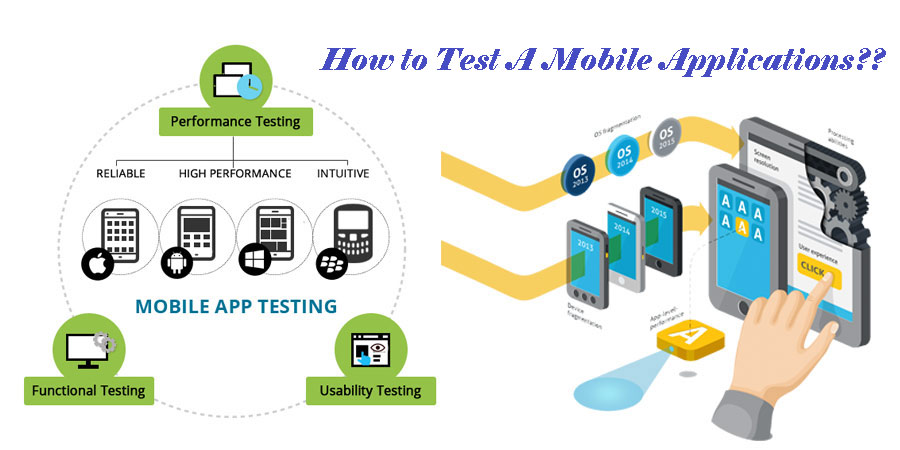 Mobile Applications Testing – In the mobile applications development life cycle Quality Assurance plays an important role. QA must be involved in all stages of development to ensure the successful development of any app from creating the concept, analyzing requirements & wishes, creating test specifications, testing recent versions of the applications and releasing the finished product to the post development review process.

Before the first assembly of a functioning app begins this phase begins after Mobile app development has been commissioned and is complete important activities during this phase included:
1. Identifying target devices
2. Introducing functional requirements
3. Developing test documentation
4. Preparing the test environment

To determine target devices include Mobile Applications Testing guidelines are:

If the application has no performance problems on it. there should be no problems in later versions of the device For example. for iOS devices it should be the first iPad with iOS 5.1.1. The phone 3GS only runs iOS 4.3.5, so it is the least-productive platform to develop for but the device is still popular globally.

the next phase is to introduce functional requirements and it is important to define whether the app is installable or browser-based and is it interacting with a database or website, is it interacting with other apps / social networks or if it is completely self-contained which does not interact with the Internet & cellular network. The Information collected at this point should focus on important app functions.

After the earlier phase it is the time to develop test documentation. As tasks within the app are typically done with just a few clicks & do not involve complex tasks so many mobile apps only need high-level documentation and it is not necessary to create detailed instructions for testing and for non-mobile apps as too, much depends on optimally partitioning app functionality into blocks while creating test documentation which requires less time to verify various functions.

It may be useful to analyze user reviews & feedback that has been posted on social networks and the app marketplace if the app is an updated version of an existing App Store / Google Play offering. In these environments by end users Problems are often found and documented and this information will help identify & focus on the app’s most important shortcomings.

Users expect to find specific problems have fixed when new app versions are introducing. It often causes them to react with anger / frustration if they and others have taken the time to document / report errors. It can be useful to pay special attention to them during testing and add these end-user concerns to the test checklist as a separate category of problems.

Preparing a test environment typically requires the installation and configuration of required apps on the QA engineer’s computer and installation of required apps on the mobile device, as well as this might include apps such as the iphone Configuration Utility and Android SDK. It ends with the completion of product development and starts after the integration of the first assembly and from here; the process becomes an iterative cycle which includes testing multiple assemblies at regular intervals for once or twice a week for example.

With each new build of the app development and testing are carring out simultaneously. Basically the main idea of testing is for Test engineers to put themselves in the shoes of the user with more profound knowledge of the settings and the principles of a particular device & the features of the app being tested.
Here we have some characteristics with areas that require special attention when it comes to testing for various mobile operating systems for different types of applications & operating platforms

Regardless of the device/OS Check this Also:-

During early iterative phases, a full test might not have been performed, or more regression tests may be required and this phase includes detailed and complete testing to stabilize the app and uncover minor defects.

The final phase is for acceptance testing where the focus is to check if the app matches. Its acceptance criteria which was defining at the start of the development cycle or not.
Based on the app requirements acceptance testing is performing base on a set of typical. Test cases and scenarios that are creating.

Especially when further support of the app is not providing once it is making public than this phase of testing is also typically the most important.

Acceptance testing is useing to ensure that the customer is happy with the results of the development process and quality of the app is perfect. Here customer decides if the app is excellent enough to accept it as final & that decision is primarily based on the test results and after that you are certain to end up with functional product.